Happy Thanksgiving everyone!!
You know, I never think of fall as being a season I like all that much. It's rainy, dreary, boring, cold, lame. But this year, for reasons unknown I got really excited.I think it's actually the lack of usual rainy, grey fall weather home to Vancouver that has sparked my longing for everything fall. I've become particularly obsessed with pumpkin, cinnamon apple, and other fall flavours. I've also adopted a lot of browns, pumpkin/squash oranges, and deep reds into my wardrobe. My most recent excitement however has been over thanksgiving dinner. Aaaaah!! Nothing says fall like a harvest vegetable medley, some squash, potato mashies, turkey, and a big dollop of cranberry sauce! Not to mention the most important aspect of thanksgiving dinner... Pie. Diet friendly pie that is of course! Pumpkin pie. Apple pie. Pear pie. More pumpkin pie! Is there a person in the world who doesn't love pumpkin pie? Probably. But that person is beyond doubt crazy or seriously confused. Especially if we're talking about such a healthy diet friendly pumpkin pie. Here is a picture of my apple pie, pear-cranberry pie, and a few of my pumpkin tartlettes. 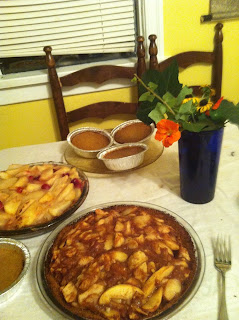 So now I will explain to you my pumpkin pie endeavor.

Step 1: obtain a massive pumpkin.
Honestly, $5 for a 15 ounce can of pumpkin?! No way man! So one day I decide to buy a pumpkin from superstore so I get off the skytrain near the store and I wander this way and that and after wandering in each direction for about 15 minutes I realize... There is no superstore here... I got off at the wrong stop, fancy that. I finally figured out google maps and I get off at a new station which happens to also be the wrong stop so I had to walk 5 looong blocks in my high heeled boots to get there but I did get there in the end. And so with my temper steaming I buy my huge pumpkin and bus home then walk home 7 blocks with a huge pumpkin in my arms. That was sort of awkward not to mention hard on the back but in the end, I ended up with a very satisfying extra large pumpkin sitting in my kitchen.

Step 2: purée the pumpkin.
This, was harder than you would think. First, you must chop the pumpkin which is... Difficult. It involved hacking it open with an axe. I left that to my mom ;) Then, you have to steam/boil it which is fine, not too much trouble there. Next, you need to peel it which is very bothersome and painful if you don't let the pumpkin cool very long. Which of course I didn't. LASTLY you need to purée it and since I only had a very old blender to do that with , it was quite the ordeal. The result however, was 6 cups of leftover pumpkin purée, two large pumpkin pies, and 8 little pumpkin tartlettes which I am very proud of.

Step 3: baking!
This is the fun part :) if you're interested, I followed a "hungry girl" recipe :

It turned out great with the following adjustments:
Crust:
-I used 1 1/3 cup fiber 1 cereal and 8 graham crackers
-I didn't have light whipped buttery spread so I just used 3 tbsp normal butter and it worked well
Filling:
-I only put 2/3 can evaporated milk (8ounces)
-In place of 3/4 cup Splenda I used 1/2 cup Splenda and 1/4 cup brown sugar
-If you don't have any pumpkin spice use 1/2 tsp each ginger, cinnamon, nutmeg and 1/4 tsp ground cloves
-add 1 tbsp of cornstarch, trust me it makes for a really good texture

So there's my new favourite pumpkin pie recipe. It has 130 calories per piece (1/8 of pie), a ton of protein and a ton of fiber! Great for breakfast :D  The texture is really nice and dense and you honestly CANNOT tell that the recipe is low cal. I know Americans and other cultures celebrate thanksgiving later so hopefully this will still apply to some ppl but even so, there's always Christmas.
Posted by The artful chicken at 20:20